The Grand Opening of the Canyon Country Discovery Center was held just about a week and a half ago here in Monticello – I’d been looking forward to it for months!  I joked back in June in my entry on the Stars & S’mores program at the Discovery Center, wondering if it would be bigger than our ‘famous’ Maverick Grand Opening back in 2011, and I think it’s safe to say that it was indeed a much, much more successful event!

Through work, I was invited to a grand opening dinner the night before the big grand opening for the public on Saturday.  My husband and I went and I’m glad we did because, since it was a dinner for adults only, we had a chance to walk through the exhibit hall and test out all the learning stations without having to share with the kids!  I know that sounds horrible, but if you saw how many kids were at the Grand Opening the next day, you’d definitely agree with me!

The first thing that we saw when we walked in the door was a giant Lite Brite just begging to be played with!  We played with it a little, but I should have taken advantage of the fact that there were no kids there and spent more time on it because it was one of the stations that was always really, really busy the next day.

When we saw the Windmill exhibit we decided to make a competition out of it to see who could build a windmill that would produce the most power.  I thought it was going to be really easy and after taking a quick look at the example, I quickly whipped together my own windmill at the building station, and took it over to the wind chamber to test it out. Much to my disappointment , I couldn’t even get mine to register!  Needless to say, I lost.  Let’s just leave it at that. (Yes, I’m a little competitive when it comes to my husband!  And if you look at the smug smile on his face in the video below, you’ll understand why I hate losing to him!)

As much fun as it was to get to check out the exhibits on our own, I couldn’t stop thinking about how much fun my son was going to have when we brought him back the next day.  He’s been up there a couple times before- they had a soft opening back in the winter and they had a few exhibits up at that time and he was completely obsessed with the Wind Tube.  I kept thinking that if only we had one at home, I might actually be able to get something done around the house once in a while!

The next day when we arrived for the Grand Opening with our son, just like my husband and I, the first thing he went to was the giant Lite Brite, and once I showed him that he could put the color rods in the holes to make them light up, he was hooked! 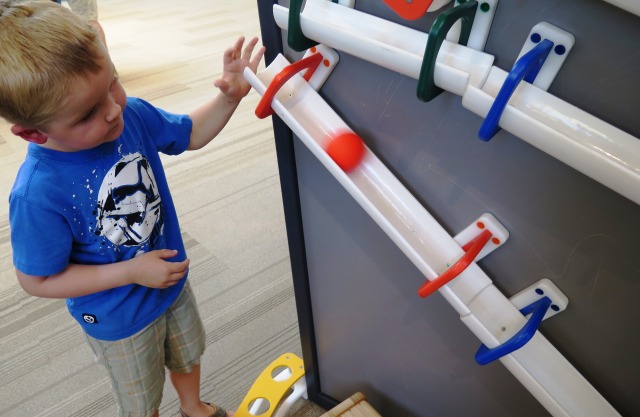 One of the most popular exhibits with kids seemed to be the Paths of Motion station.  The challenge was to see how many different ways you could get the balls to end up in the same place using the various shaped magnetic pieces provided.  This station was so popular, my son barely got a chance to play with it, and although I could tell that he was really interested in it, he moved on pretty quickly- probably after realizing that he was going to have to wait a long time for a turn. 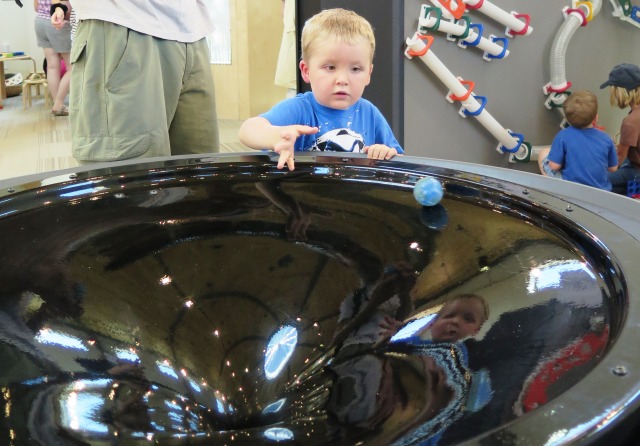 Bottom of the Funnel Table at the Canyon Country Discovery Center, Monticello, UT

The Funnel Table was another fun exhibit, and although it might not have been intentional, I think the kids enjoyed the bottom of the table just as much as the top!

The Augmented Reality Sandbox is definitely my favorite exhibit-  I could spend hours happily shaping the sand and watching the topographic image that’s projected down onto the sand change to match the newly formed contours.  You can make mountains, rivers, lakes… you can even make it rain by holding your hand over an area to make a shadow.  It’s such a cool exhibit- I remember seeing it for the first time last year when I got to tour the center when it was still under construction and I was completely blown away by it!  A year later, the thrill hasn’t worn off- I’m still in awe of it!

(*Coincidentally, I just looked back to see when exactly it was that I had toured the center, and it was August 19th, 2015- exactly one year ago from the night of the Grand Opening dinner!) 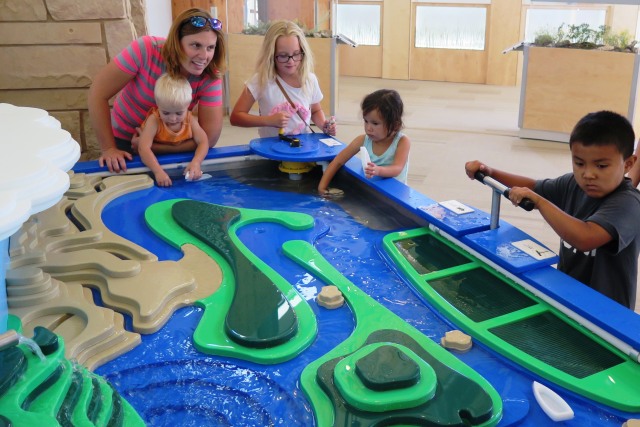 Another new exhibit that we hadn’t seen yet was the water table.  I don’t think it’s a secret to anyone, but kids LOVE playing in the water!  And I think it’s even better when they can control the water, so the new water table exhibit was definitely popular!  Kids can build dams, change the course of the water and watch the boats float downstream, make it rain, and adjust where the water enters the table.  What more could a kid want?! 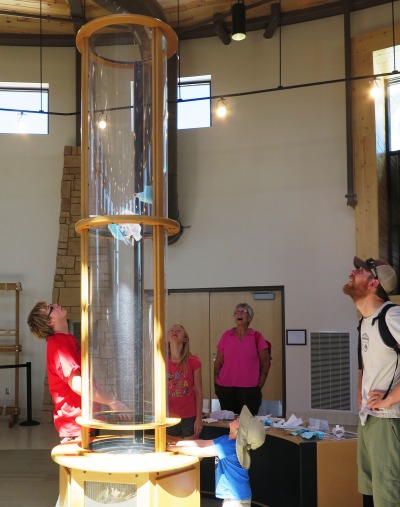 And of course, there’s no way we could have visited the Exhibit Hall without testing out  the Wind Tube.  As I mentioned, we’ve been up to the Discovery Center a few times, so we’ve had a chance to try out several of the exhibits, but it was fun to watch people who were seeing everything for the first time.

I’ve just mentioned my favorite exhibits- there are quite a few more, and I honestly haven’t tried them all out yet.  According to the Canyon Country Discovery Center website, the exhibit hall has room for 20-30 exhibits, so I’m sure they will be introducing new exhibits on a regular basis. 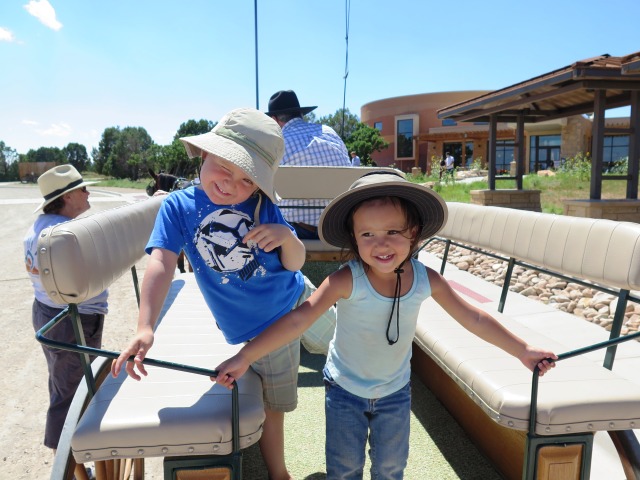 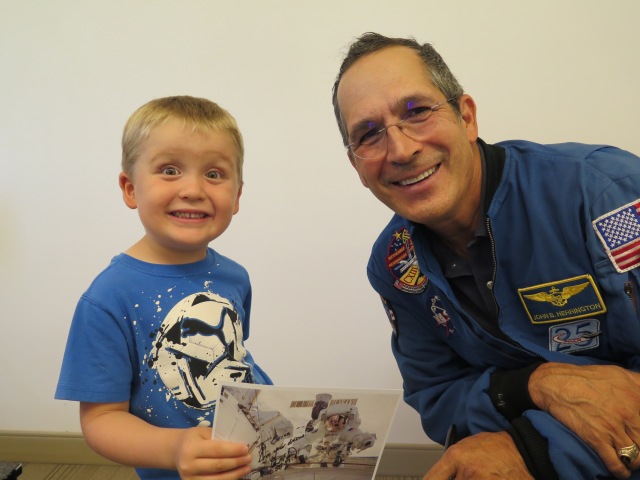 Aside from getting to test out all the new exhibits, there was quite a bit of other stuff going on at the Grand Opening.  There were vendors, (artists, food trucks, various goods, etc.) Navajo, Ute, Hopi, Hispanic, and Pioneer cultural demonstrations, horse drawn wagon rides around the campus, a workshop & keynote speech from the first Native American astronaut- Commander John Herrington, 5 different live bands/musicians playing all throughout the day with the R. Carlos Nakai Quartet closing out the evening, and a star party at the newly completed observatory after the sun went down.

There was a lot going on and there were a lot of things we missed- it was impossible to make it to everything!  But we did our best and ended up staying from about noon-5:00pm, then we ran home to eat dinner really fast then went straight back up there to listen to the R. Carlos Nakai Quartet and were there from about 7:00pm-8:30pm.  My son spent the entire concert playing in the playscape, which is an AWESOME place for kids to explore and get their energy out- there are paths and tunnels, a huge sandbox with toys, musical features, and bench swings.  Unfortunately I didn’t take any photos of the playscape during the grand opening, but luckily I have a friend who did! (I’ve also added a few other playscape photos that I’ve taken since then.) 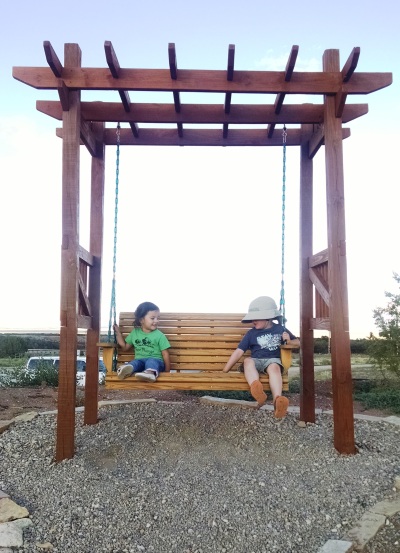 Before going to the grand opening, I had thought that there would be a lot of people from town up there and that I’d probably recognize a majority of the people, but that was not the case at all.  There were quite a few people that I knew and recognized from Monticello, Blanding, and Bluff there, but I was surprised and happy to see how many people from the Salt Lake area and even out of state were there!

I’ve known that this was in the works for years now, and watched the progress with the construction of the building for the past year, but I still can’t believe that we have such an amazing new educational center here in Monticello!  I feel so lucky that my son will get to grow up with the Canyon Country Discovery Center right here in town, and will get to participate in their programs as he grows.

My husband, son, and I have been going up to walk the trails around the center and/or to take our son to play in the playscape at least once a week lately, and we’re definitely planning on making regular trips to the center and exhibit hall as well.  After all, I still need to redeem myself and beat my husband in a rematch of our windmill building competition!