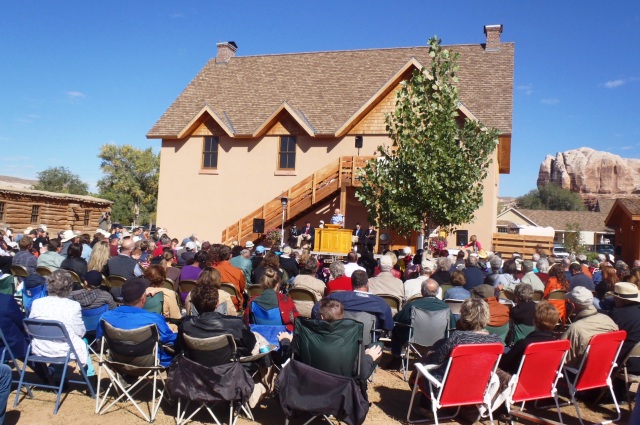 This past weekend my husband, son, and I headed down to Bluff for the dedication ceremony for the new Co-Op Store at the Bluff Fort.  The Co-Op store was actually finished in the spring and officially opened to the public in mid-May.  I have to admit- ever since I heard that the dedication was going to be in October, I’ve been wondering why they were waiting until then to do it when the Co-op was already open.  As I started writing this blog entry and looked back at my previous entry about the ground breaking, it finally hit me- the dedication ceremony was held 2 years to the day after the ground breaking!  Looking back at my pictures from the ground breaking I can’t stop thinking about how much they’ve accomplished in just two years- it really is amazing! 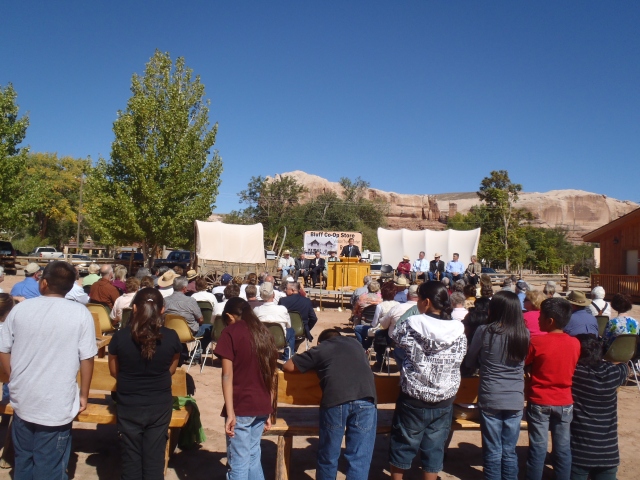 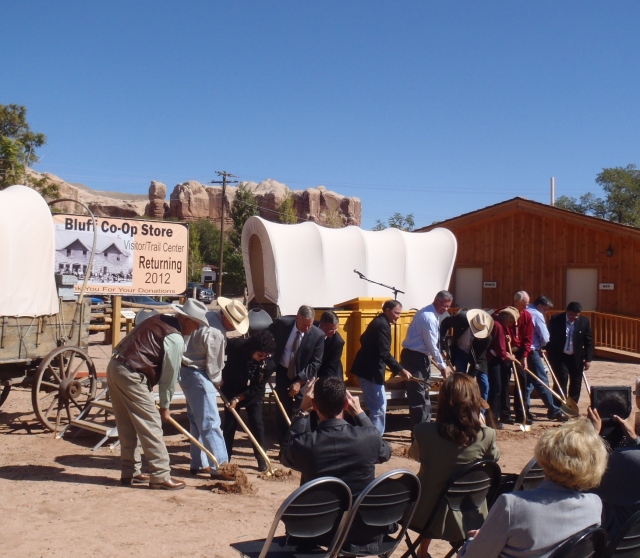 This summer the Bluff Fort started an evening program called, ‘Friday Night at the Fort’ where each week a different musician or storyteller performed upstairs in the new Co-Op building.  I really wanted to go to one of the performances, but there was no way I was going to disrupt my little guy’s bedtime, (sleep- both his and ours, is WAY too important to me!)  so I never made it down.  Maybe next year…  But when I heard that the dedication ceremony was going to be in the morning, AND that they were going to be serving breakfast (pioneer Johnny cakes, bacon, eggs, and melon) I knew I’d be able to I talk my husband into making the trip down to check it out! 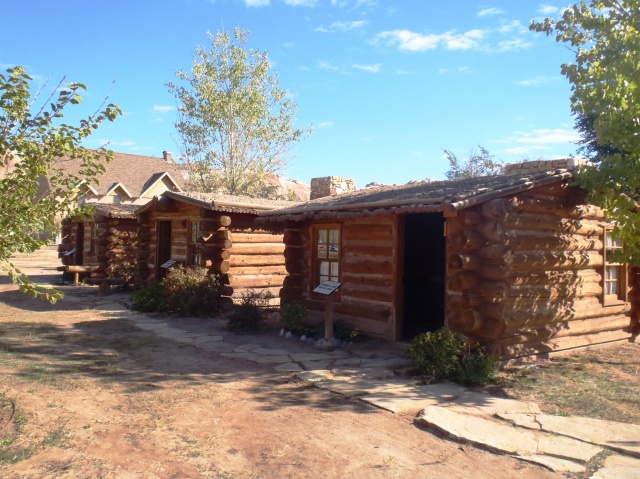 My son’s favorite part of the Fort… the holes in the benches with water in them! 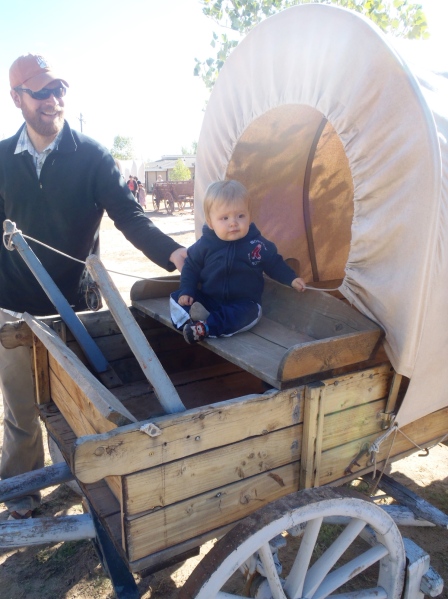 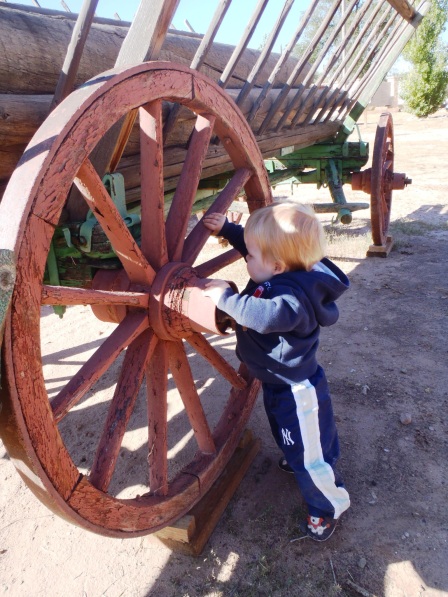 Playing with the wagon wheels

We arrived at the Fort about 30 minutes before the Dedication Ceremony was supposed to start and with plenty of time for breakfast, or so we thought…  The schedules I had seen all said that the breakfast was going to be served up until the ceremony started, but when we got there, it was over!  😦  Oops.  As always, the promise of food was what I had used to get my husband to agree to go, and we had missed it!  Luckily, when we were passing through Blanding on our way down, we had seen that Lickity Split was open, so we had stopped in and picked up a couple of their DELICIOUS fresh cinnamon rolls to go.  Whew- crisis averted!

So instead of eating breakfast, we walked around the Fort a little waiting for the ceremony to start.  My husband had never been there before so we checked out all the cabins and let our little guy explore a little.  (*Yes- he’s wearing a Red Sox jacket and Yankees pants… there’s a major rivalry going on between one of his grandmas and grandpas!) 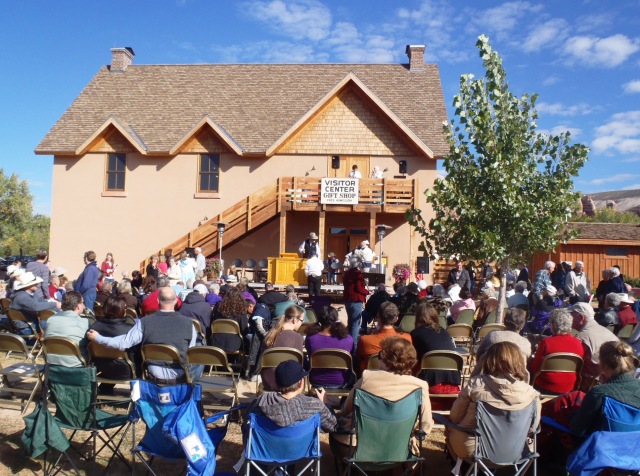 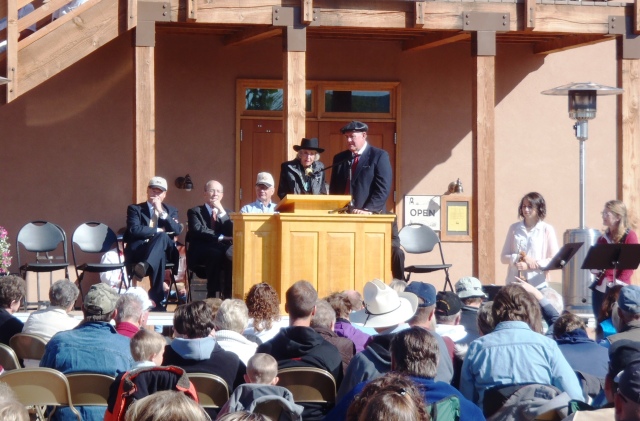 By the time the ceremony started, the place was packed!  The local newspaper had said to BYOC (Bring Your Own Chair) and I could see why- there really was a great turnout- no wonder they ran out of food early!  We had forgotten our chairs that morning, but we figured that with our little guy, we’d probably be better off standing in the back anyway.

There were several speakers including a local historian who gave the history of the Co-Op Store.  Here’s a quick overview from my last blog entry on the Bluff Fort: The Co-Op Store was built in 1889 and by the early 1900s, the co-op was the heart of the community providing a means for buying, selling, and trading.  Unfortunately, the co-op was blown up in 1925 during an attempted robbery.  The robber, a newly hired employee who is known by the alias of Fred Starr, used too much dynamite when attempting to break into the safe, and blew up both himself and the store. (For more information on the rest of the Fort- please see my blog entry: Bluff Fort Historic Site) 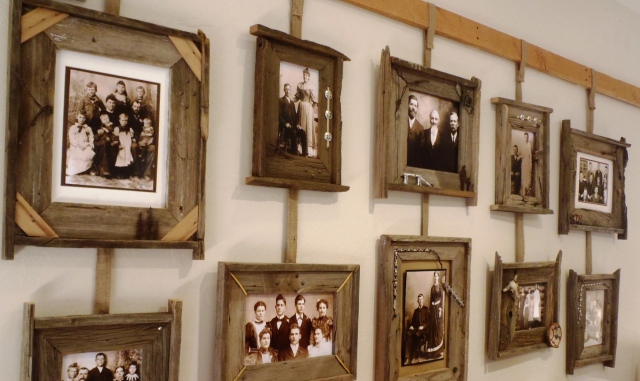 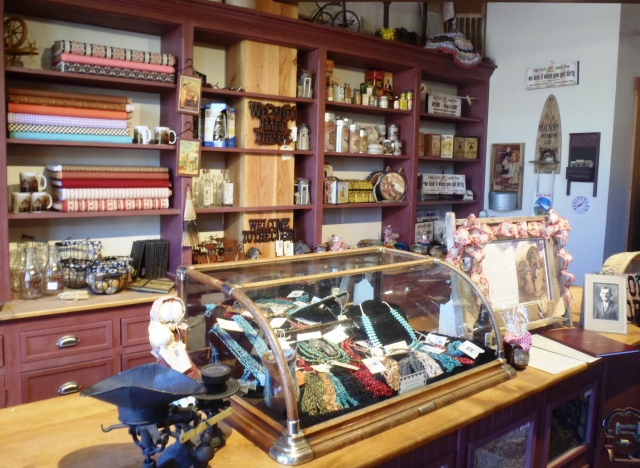 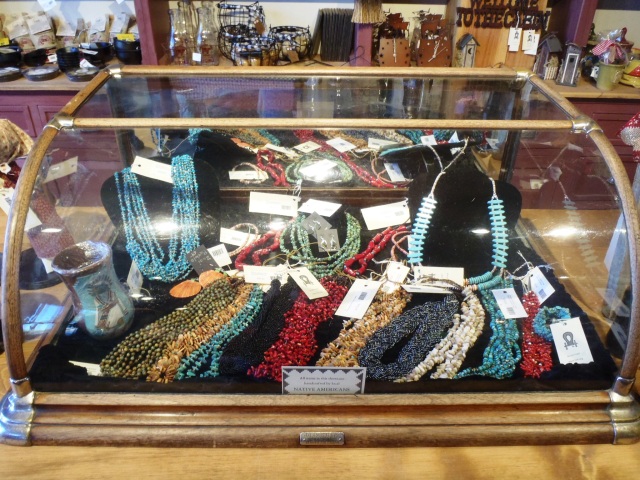 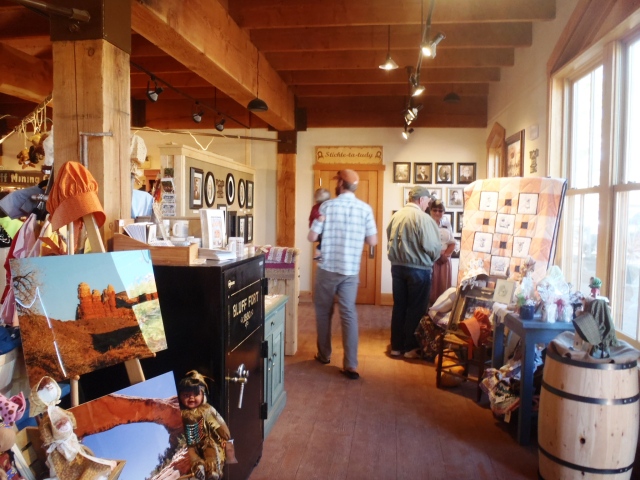 When the ceremony was over, we FINALLY got to check out the new Co-Op Store.  I was totally blown away- it’s amazing!  I had seen a few pictures, but it was really so much more than I had imagined.  And it was packed!  My #1 priority was to find the lemon zucchini cookies that they sell there.  I don’t think I mentioned it in my blog entry about the ground breaking ceremony, but the thing that stands out in my mind the most about that day was the DELICIOUS cookies that were served with lunch.  The ground breaking was 2 years ago- that should show how good these cookies are- 2 years later and I’m still thinking about them! 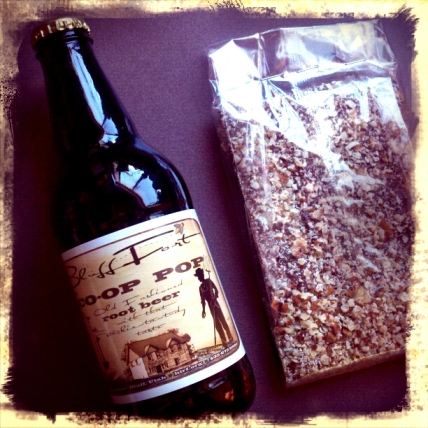 If you follow this blog, you already know that food plays a HUGE part in my husband’s and my activities, so I was so excited to find out that the Co-Op Store sells several different homemade treats.  I bought a couple of the lemon zucchini cookies as well as some Bluff Fort Root Beer and English Toffee.  I haven’t tried the root beer yet, but the cookies barely made it home, and the toffee was gone very shortly after- they were both really good.  So good in fact, that I’m considering trying to put in an ‘order’ with the director of our office who lives in Bluff…. 🙂

Ever since my first visit, I’ve really been impressed with the Bluff Fort.  AND the fact that it’s free to visit makes it even better!  It’s always been a great place to stop to get a feel for the local history of the area, but now with the new Co-Op Store, it’s even better!  If you drive through Bluff and don’t stop at the Bluff Fort, you really are missing out!

Distance from Bluff to lodging in San Juan County, Utah: