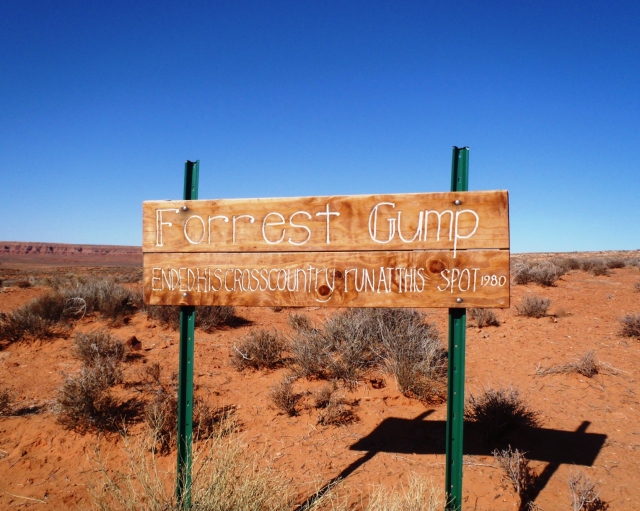 As the administrator of this blog I am able to see which entries are getting the most views and what search terms people are typing in that are bringing them to this blog.  I’ve been very surprised to see that ever since I posted the entry on the tour of Monument Valley I took with Goulding’s Lodge, search terms about ‘Forrest Gump’ show up on a regular basis. (I posted a picture of the stretch of road that was in the movie in my blog entry)

I think one of the reasons that I’ve been surprised by this is because even though I’ve seen Forrest Gump many, many times, it wasn’t until I moved here and heard people talking about ‘Forrest Gump Hill’ (the stretch of road between Mexican Hat and Monument Valley where Forrest decided to stop running) that I realized that part of it was shot here. 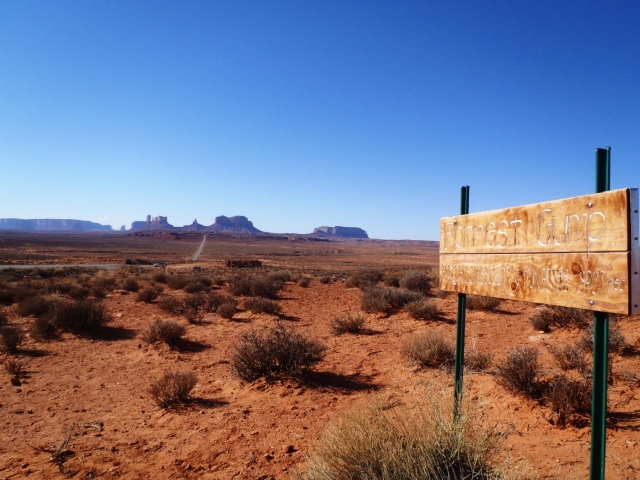 For my generation Forrest Gump is probably one of the most well known movies that was shot in San Juan County, but the area is probably best known for the old John Ford westerns that were filmed in Monument Valley.  Monument Valley has become an iconic image of the American West, but most people probably have no idea HOW this came to be…

Harry and Leone ‘Mike’ Goulding came to Monument Valley in the mid-1920s to homestead and open a trading post to trade with the Native Americans (mostly Navajo) who lived in the area.  By the 1930s, between the Great Depression and two bad years of drought, the area had really been hit hard.  In 1938 Harry learned that the Hollywood film company, United Artists, was looking for a location to shoot a new western movie.  Harry recruited Josef Muench- a photographer who had first visited and photographed Monument Valley in 1935, to compile an album of scenes of the valley for Harry to present to United Artists when he arrived in Hollywood.

Here’s a little bit of the film history of San Juan County, Utah…

The first of the John Ford/John Wayne movies to be filmed in Monument Valley was ‘Stagecoach’ which was shot in 1939. 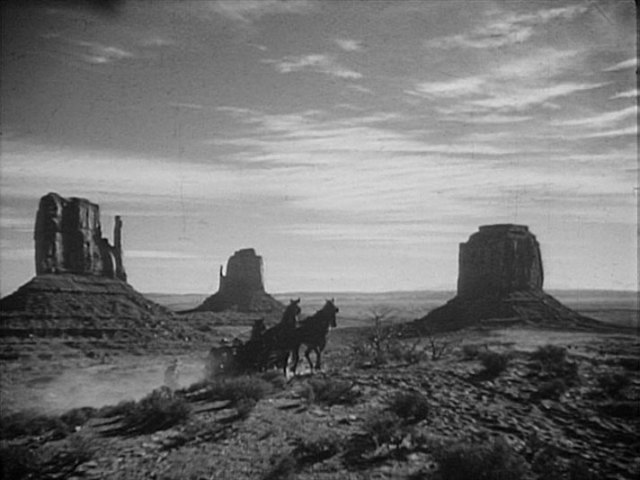 ‘She Wore A Yellow Ribbon’, another John Ford/John Wayne western, was shot in Monument Valley in 1949. 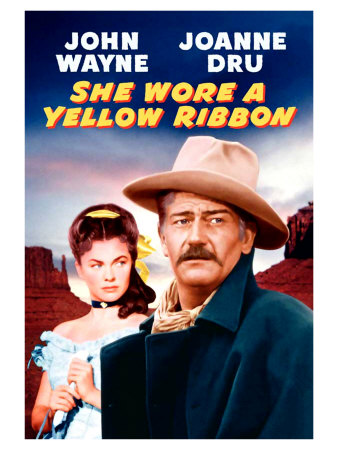 Another John Ford/John Wayne movie filmed in Monument Valley was ‘The Searchers’, which was shot in 1956. 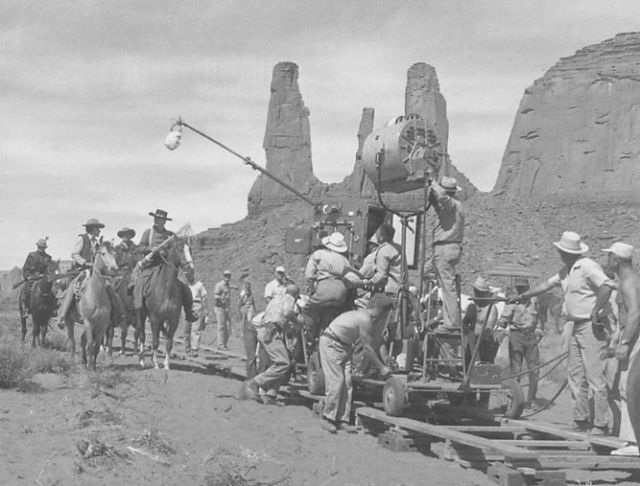 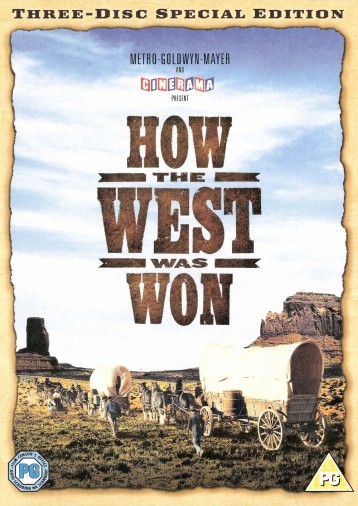 John Ford filmed so many movies in Monument Valley, there is even a viewpoint that has been named after him- you can see it in the picture below. 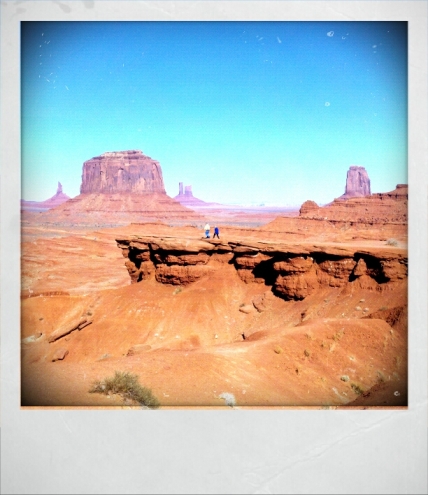 Monument Valley became very well known for westerns, but there have actually been quite a wide variety of movies filmed there- action, comedies, science fiction, drama, etc.  In 1975 part of the Clint Eastwood movie ‘Eiger Sanction’ was filmed in Monument Valley.  This movie takes place in the Alps, but has a scene that was shot on top of the ‘Totem Pole’ rock formation in Monument Valley. 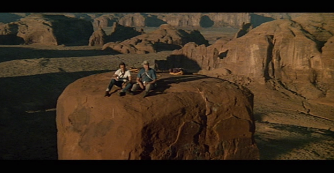 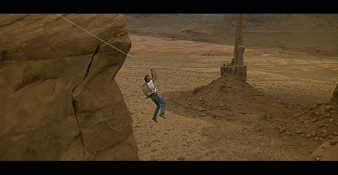 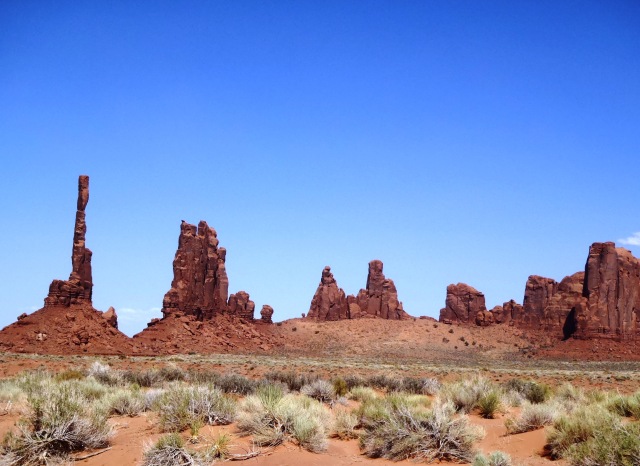 You might also remember the scene in ‘National Lampoon’s Vacation’ where the Griswold family’s car breaks down- that was shot in Monument Valley in 1983. 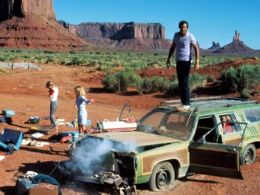 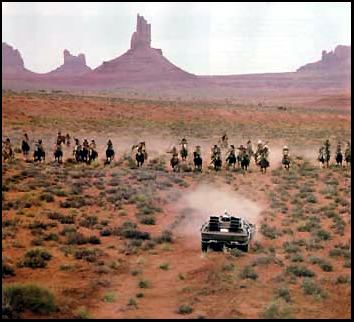 Back to the Future Part III 1990 – Monument Valley

Another of my favorites- ‘Thelma and Louise’- filmed in 1991- also had scenes that were shot in San Juan County.  They filmed in several locations in the Moab area, but the final scene where Thelma & Louise drive their car off the cliff (in the movie I think they say that it’s the Grand Canyon)  is at Dead Horse Point State Park.  Dead Horse Point is often associated with Moab since that’s the closest town, but it’s actually in San Juan County.  It’s hard to believe it’s been 20 years since that movie came out! 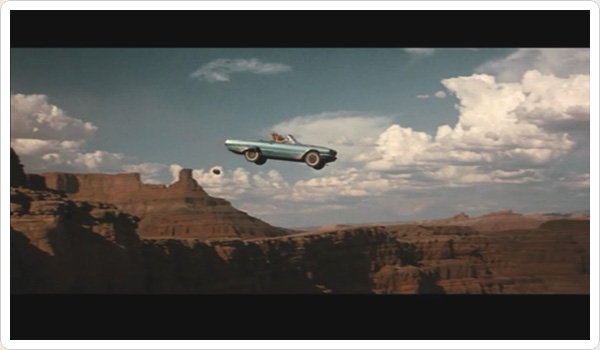 As I mentioned above, part of the running scene in ‘Forrest Gump’ was shot on Hwy 163 between Mexican Hat and Monument Valley in 1994.  This stretch of road is now known as ‘Forrest Gump Hill’. 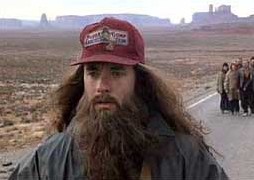 A few scenes from ‘City Slickers II: The Legend of Curly’s Gold’ were shot at Dugout Ranch in 1994.  Dugout Ranch is located on Hwy 211 leading to the Needles District of Canyonlands National Park. 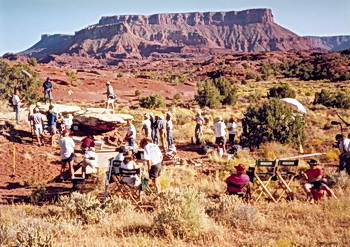 Another movie that was filmed at Dugout Ranch was ‘Riders of the Purple Sage’, shot in 1995. 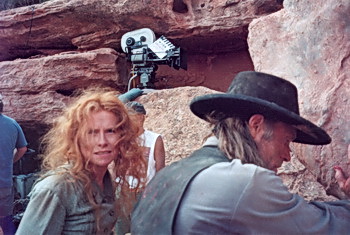 Just last year the TV show, ‘Dr. Who’ shot scenes for two episodes (‘Impossible Astronaut’ and ‘Day of the Moon’) in Monument Valley and Valley of the Gods. 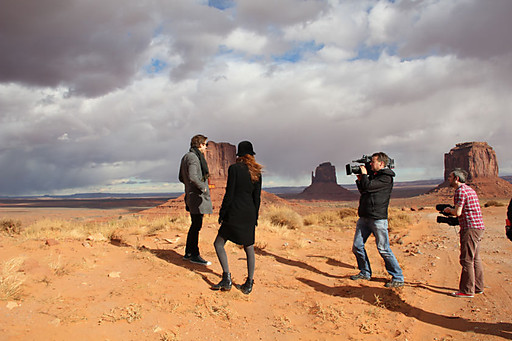 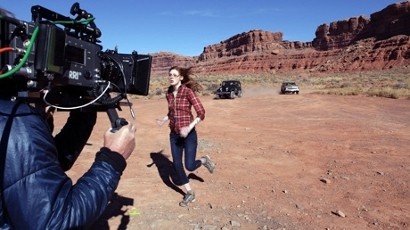 Not only has Monument Valley appeared in countless movies and commercials, it’s also made an appearance in comic strips and cartoons as well.  One of the oldest examples I found was a Krazy Kat comic strip created by George Herriman.  I’m not sure of the exact year of this particular comic strip, but Krazy Kat was published in newspapers between 1913 and 1944. 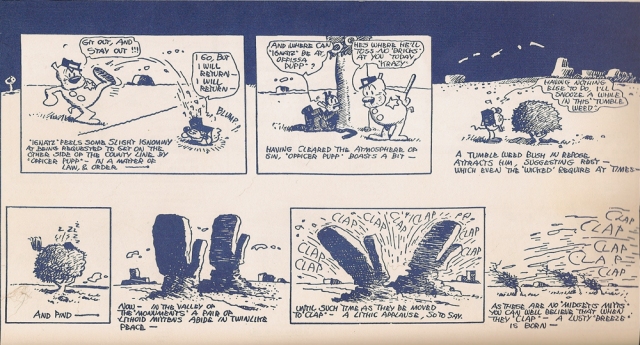 Of course we all remember the endless desert landscapes in the old Road Runner cartoons- I don’t know that it can be confirmed that the backdrop is Monument Valley, but it looks like it to me! 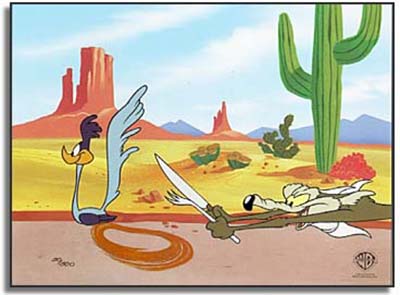 And a much more recent animated film, ‘Cars’- which came out in 2006- spoofs Monument Valley with an area called ‘Ornament Valley’. 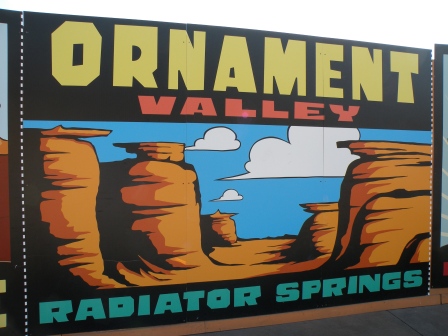 Ornament Valley- a Spoof on Monument Valley from the Pixar film, ‘Cars’

There are LOTS of other movies, TV shows,  music videos, commercials, etc. that have been shot in the area, but it’s WAY too many to include in one blog post, so this is just a sample of some of the more well known ones.  (*Please feel free to leave comments if I’ve left your favorites out!)

The Goulding’s Lodge Trading Post & Museum in Monument Valley, is a great stop if you’re interested in the movie history of the area.  The building is the original trading post that Harry and ‘Mike’ Goulding built a few years after they first arrived in Monument Valley.  Part of the museum is set up like the old trading post, another part is filled with movie memorabilia, and the upstairs- which was originally the Gouldings’ living quarters- is still set up with their furniture and some of their belongings.  The museum is free to the public and is located next to the restaurant and gift shop buildings. 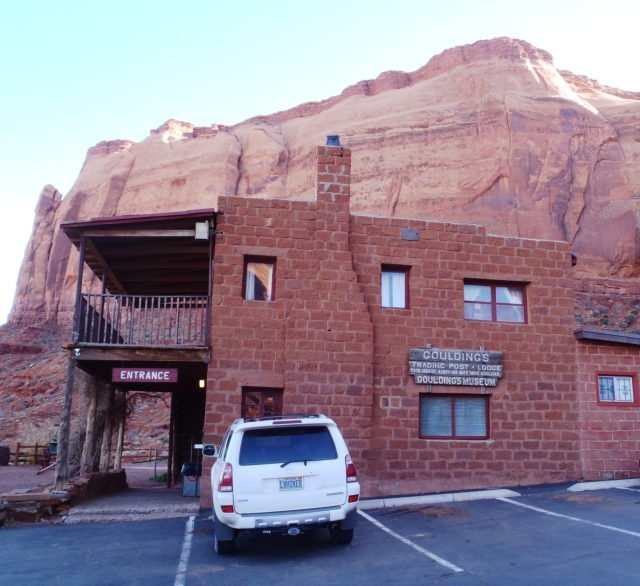 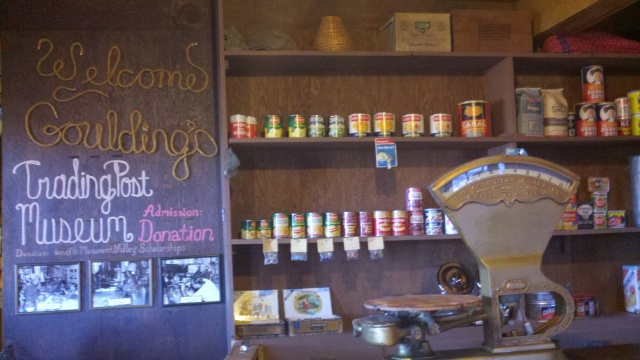 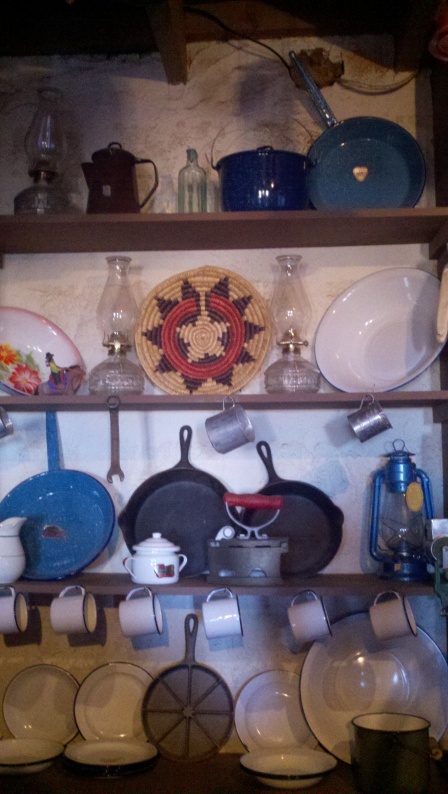 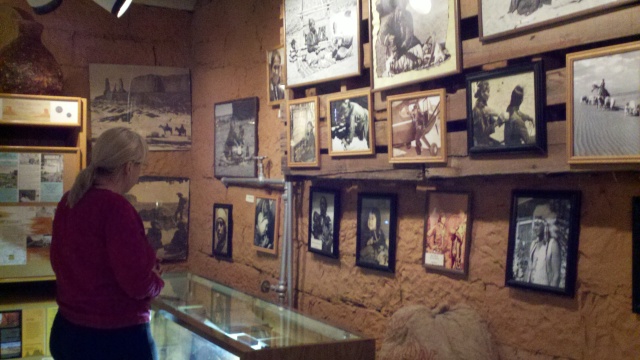 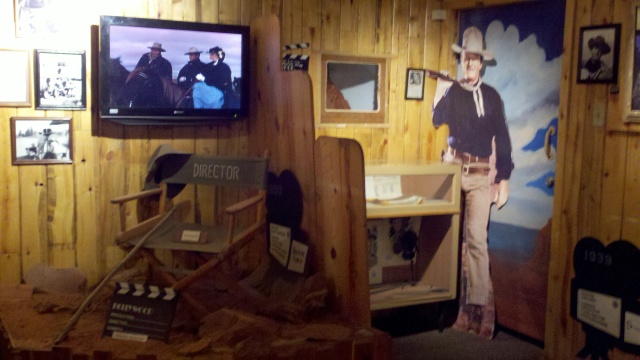 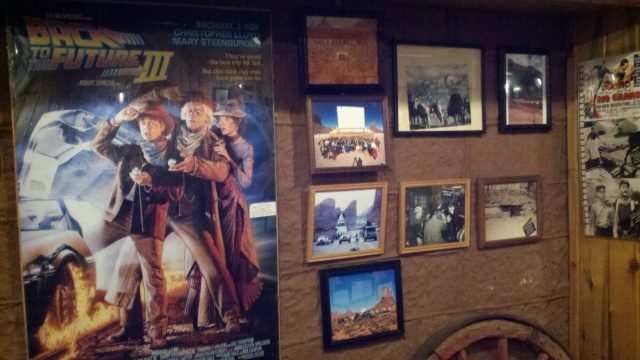 Back to the Future !!! Movie Memorabilia – Goulding’s Museum- Monument Valley 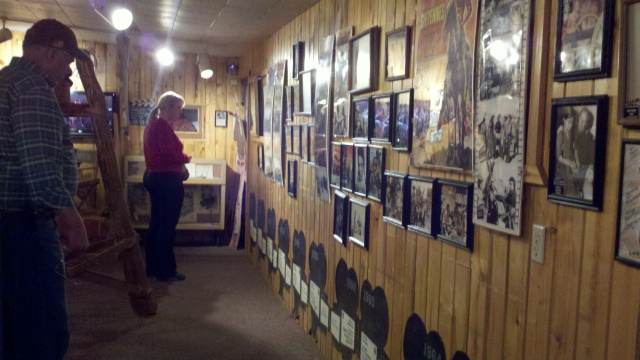 Keep an eye on our blog in the next couple weeks for another giveaway… and don’t forget to ‘like’ us on facebook so you don’t miss out on the San Juan County/Utah goodies we’re planning to give away! 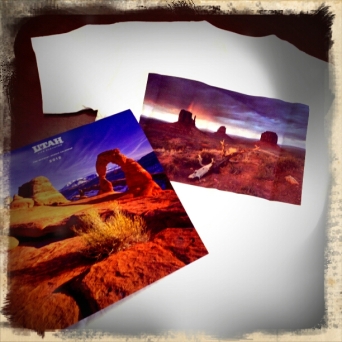 Prizes for our upcoming giveaway!